It’s just another early morning workout and I’m starving for a fast and warm breakfast.  I happen to have a extra unopened can of pumpkin puree left over from Thanksgiving.  Pumpkin is a nutrient dense fruit so I decided to add it to my slow cooker oatmeal routine. Unfortunately, the first attempt resulted in some unsavory burned pumpkin oatmeal on the edges of the slow cooker. In my second attempt, I turned my slow cooker into a double boiler. This yielded perfectly cooked, unburned oatmeal. Before I share this recipe, allow me to entertain you with a little Hungry Athlete story.

I’ve been ramping up for another 50K but I cannot get on the trails early enough in the afternoons to complete my scheduled midweek 8 mile runs while it’s still daylight. I got caught in the dark twice. On one occasion I talked the park ranger out of giving me a $200 ticket for being on the trails after sunset. The other time I was almost kidnapped by Thelma and Louise. I had exited a trail I had been running on and ran a quick out and back on a paved road. By the time I arrived back at that trail head, the gate was chained up. Since I could not run on the highway (the only other way back to where my car was parked) I was given a ride by two ladies who I will refer to as Thelma and Louis.  It was dark.  I was getting cold.  The only thing I had on me was the key to my car.  While I’m sitting in the back of Thelma’s car and headed down the highway, I hear the following:

T: “You know those runners … they never have any money on them.”

T: “Yeh, who accepts rides from strangers? What would you do to protect yourself?”

L: “I’d poke them in the eyeballs. They say you should go for the eyes”

Clearly the ladies were having fun with me and I lived to write this recipe, however the moral to the story is to plan your trail runs better.  Don’t get caught on the trails before they close.  Carry ID and your cell phone so you don’t have to accept rides from strangers and live to enjoy Pumpkin Oatmeal in the morning.

* Note: Ideally, if you can do without the dark brown sugar, that is the healthiest option, but I personally prefer to have a small amount of it in my oatmeal. Since this recipe is a serving size for 4, one tablespoon isn’t so bad. I sometimes enjoy my pumpkin oatmeal with a diced raw apple or a sliced banana, which adds a natural sweetness to the oatmeal.  I found that by weening myself off of sugar, I can adapt to enjoying foods like oatmeal and coffee without sugar.

Fill the slow cooker with water covering the pumpkin oatmeal bowl at least half way. Cover and cook on a low temperature for 7 hours.  Start the slow cooker before you go to bed and wake up to perfectly cooked oatmeal.  Give the oatmeal a thorough stir before serving.

If you prefer, serve with chopped nuts (i.e., walnuts or almonds) and / or with fresh fruit (i.e., diced apple or sliced banana). The leftover oatmeal and be stored in individual serving size containers in the refrigerator. Add a little almond milk to loosen up the oatmeal and warm it up in the microwave when you are ready to eat it. 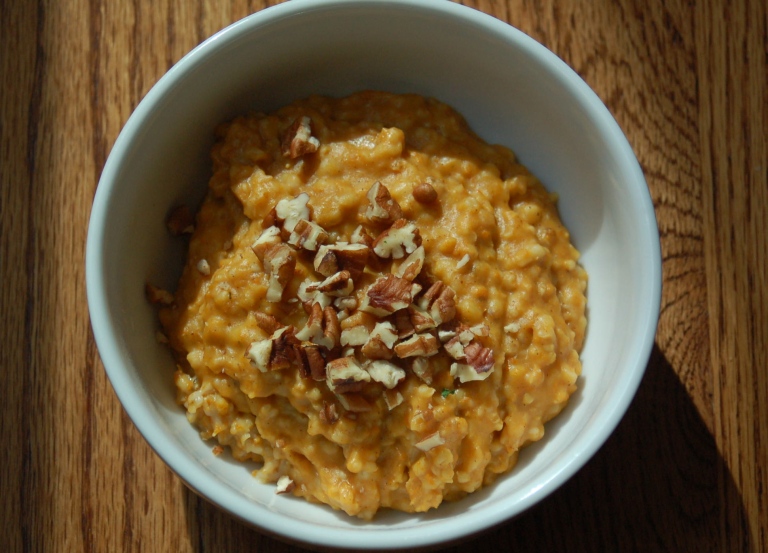