The Vineman 70.3 Half Ironman is one of my favorite courses to race.   A qualifier for the Ironman World Championship 70.3, this triathlon attracts a competitive field.   It is also a very scenic course taking athletes on a tour by Sonoma’s picturesque vineyards and wineries. 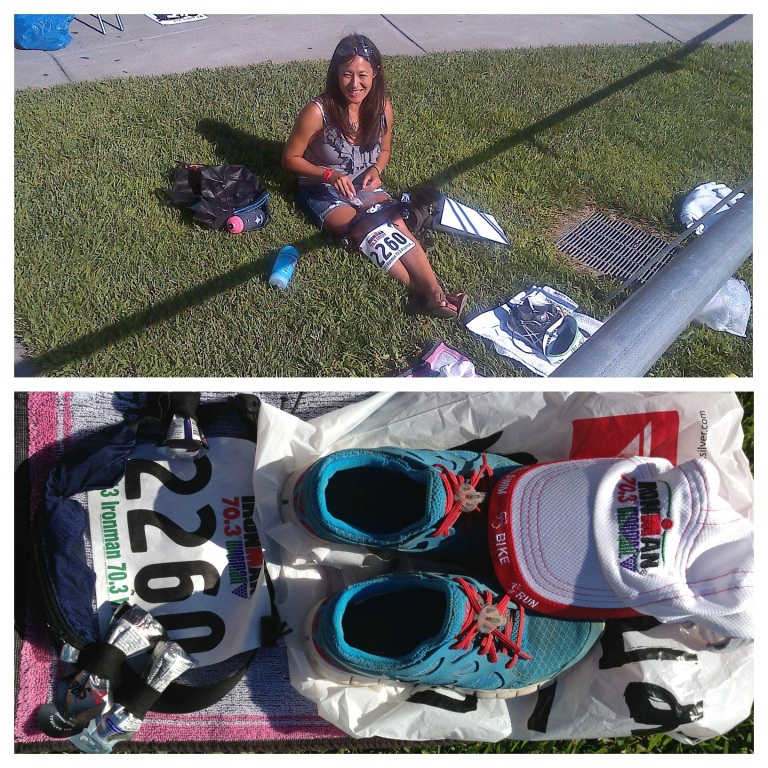 I arrived early at the Russian River and felt relaxed.  The start was located in Guerneville, about 16 miles from the finish in Windsor, California.  It was overcast and air temperatures in the low 60’s F.  I felt cold standing in my wetsuit waiting to start.  I tried to warm up by jogging in place and doing jumping jacks on the beach.  Fortunately the water temperature was about 70-71F which was warmer than the air temperature.  It felt good to jump in. 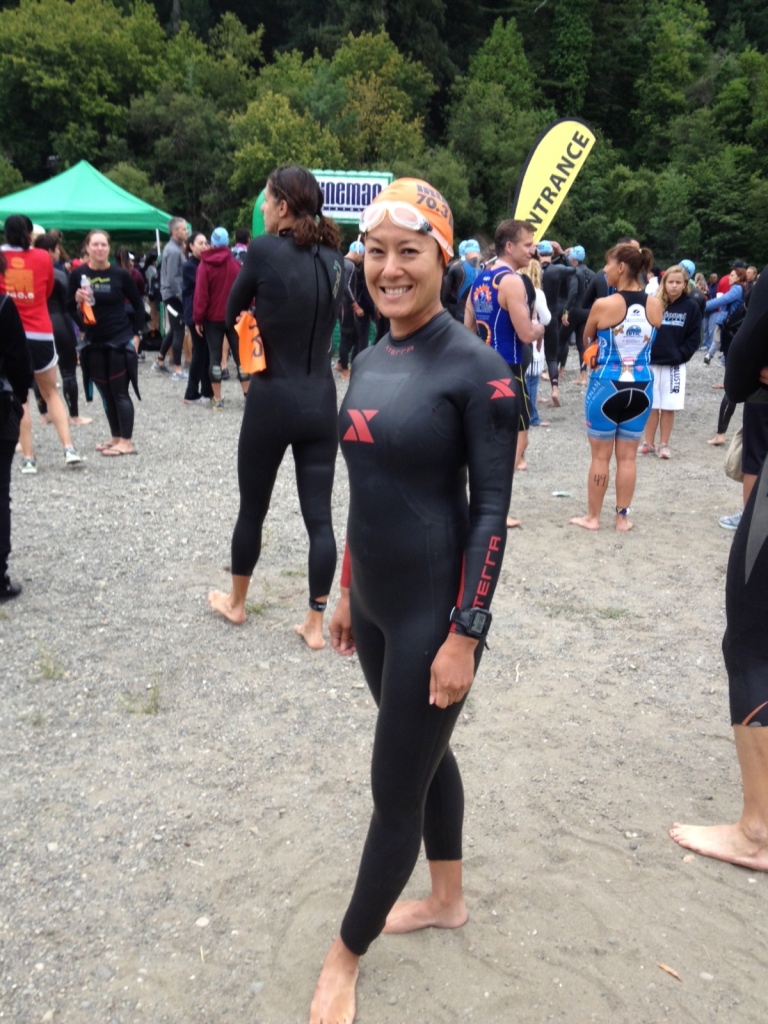 I decided to swim to the far right this year to avoid getting trampled on by the 30 year old male triathletes in the waves behind me.  Last year, 2 guys swam right over me causing my swim cap and goggles to come off.  As a result, I lost 1 contact lens.  This made for an interesting bike ride last year.  Little did I know, I’d have another “interesting” bike ride this year.

For the first time during the swim, I looked back a few times to see if there were any swimmers right behind me.   This probably cost me a little time but it provided me with comfort.  No one swam over me this year.  For the second year during this race, I stood up and walked during the swim even though I promised myself that I would not waste energy trudging through the water.  The river is notoriously shallow in some parts.  The water level seemed even lower this year.  Once I felt my hands scrape the bottom of the river, I broke my promise and walked.

My overall swim time was almost exactly the same as last year, however I believe I’m a better swimmer this year.  I felt strong at the finish and kicked harder.  Had I not swam so wide, not looked back for swimmers behind me and walked less, I suspect that I would have had a faster swim time.

I stuffed my bike shoes with a sock in each; my heart rate monitor in the left shoe and my sunglasses inside my right shoe.  In the back of my mind I always worried about leaving my expensive Oakley sunglasses out in the open but dismissed that thought.  I naively believed there would be no reason for theft since each of the athletes would come prepared with their own gear.  I was wrong.  My sunglasses were missing from my neat little set up.  Nothing else was disturbed.  I looked all over wondering if it somehow got kicked around.  I’m not sure how that would happen without other items, like my bike shoes, being disturbed.  My heart rate monitor and socks were still tucked inside my shoes, just as I had left them.

I shouted out to a few friends volunteering and spectating to see if they had an extra pair of sunglasses for me to borrow.  No such luck.  A good friend volunteering that day ran back to T1 with me to help me look for them again.  I was hoping they were hidden in my T1 gear.  Unfortunately they were not.   I fretted for a minute thinking about what it was going to be like biking without my sunglasses.  I had already sustained an eye injury and scarred my cornea last year so I was extra cautious when it came to protecting my eyes.  No time to fret.  I grabbed my bike and got on it as quickly as possible.  My T1 time was over 11 minutes, twice the amount of time I had hoped for.

I am behind schedule and riding by myself for the first few miles.  Most of the field is ahead of me.  This helped me to relax and settle into my ride.  I then noticed that my Garmin was not displaying my average pace or the mileage.  It’s not picking up the satellite.  I didn’t want to turn it on and off in the middle of the race and hoped it would eventually pick up the satellite.  It does not.  I had to ask other athletes what mileage we were at along the way.  Fortunately, my heart rate monitor was working.  I relied strictly on heart rate and feel for the entire 56 miles.  To make the ride even more interesting, my chain jams a few times.  About 1/3rd of the way into the ride, my front derailleur is unable to move the chain out of the small ring.  Perhaps the jam threw the derailleur off.  My Vision shifters are also jammed.  Great!  Perhaps some bike mechanic skills would have helped here.  Other than changing a flat, I possessed no bike repair skills.  Stuck in the small ring, I continued to ride and hoped I’d make it up Chalk Hill without any major issues. 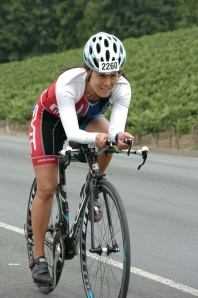 I followed the strategy prescribed by my coach, which was to ride conservatively and not push myself until after Chalk Hill.  Chalk Hill felt like a mere bump in the road.  That’s good!  It was a sign that I did not push too hard or too soon.  With permission to ride more aggressively, I passed a few athletes post Chalk Hill.  I had been playing cat and mouse with three 30-something guys for the last half of the course.  One of the guys I chicked, passed me back however he could not maintain his pace.  I got stuck behind him on a road with a narrow shoulder.  There was a lot of car traffic preventing me from passing him back right away. I felt a little frustrated then finally found an opportunity to pass him back.  It took longer than I liked.

The last stretch into town was comfortable and flat.   I tried to make up some time but was still stuck in the small ring.  At least this allowed me to spin my legs and I was able to easily run with my bike to T2 as soon as I dismounted.

I overshot my T2 row which confused me for a moment.   I quickly realized where my running shoes were.  I took an extra minute in T2 to take some fluids and a Salt Stick.  It felt warm and I did not want to cramp.  Last year I grabbed everything and took salt and fluids while running which was a better strategy.  My T2 was a minute slower compared to last year.

My legs felt heavy on the run but I quickly found my pace.  I have chronic hip and glute pain which flared up the day before.  I had been dealing with this all year.  It’s a bit uncomfortable but I knew I would be able to run through it.  I saw Coach Tom during the first few miles of the run and again towards the last 3-4 miles.  He told me to keep on smiling.  It felt warmer compared to the prior year.  My wave was also later this year (3rd to last) so I am one of the last groups out on the road with fewer athletes to run with.  I dumped cold water on my head and put ice inside my sports bra at every water station.  Last year, I ran by a few aid stations without stopping.  This year I took my time and stopped at each one.

I caught up to some of the athletes who passed me on the bike.  I noticed one lady in particular, because of the triathlon kit she was wearing.  I recognized that she was a member of a team a good friend was a member of.  She was in my wave.  I also passed her back and forth on the bike and then I passed her on the run, twice, which surprised me as she never passed me back on the run course.  I made a mental note of her race number.  I wanted to see if she was missing time recorded by the timing mats on the run.  Sure enough, she confirmed my suspicion that she cheated.  She cut out a portion of the run that travels through a vineyard.  Shameful.

Coach Tom refused to give me a time goal this year.  He knew it would be hard for me to attain this based on all the training I was doing for Ironman Lake Tahoe.  Even though my legs felt heavy, I thought I achieved a negative split on the run.  I didn’t even come close.   I was able to run most of it, only walking at the aid station or up a hill.  Most of the people I passed were walking or running very slowly.  It wasn’t my best pace but I was pleased to be running and not cramping.

I finished the run with an average pace 30 seconds per mile slower than the prior year’s.  My overall race time was 19 minutes slower compared to last year.  My nutrition was spot on.  I did not feel beaten up at the end.  It was a good race.  I enjoyed it very much and look forward to doing it again next year. 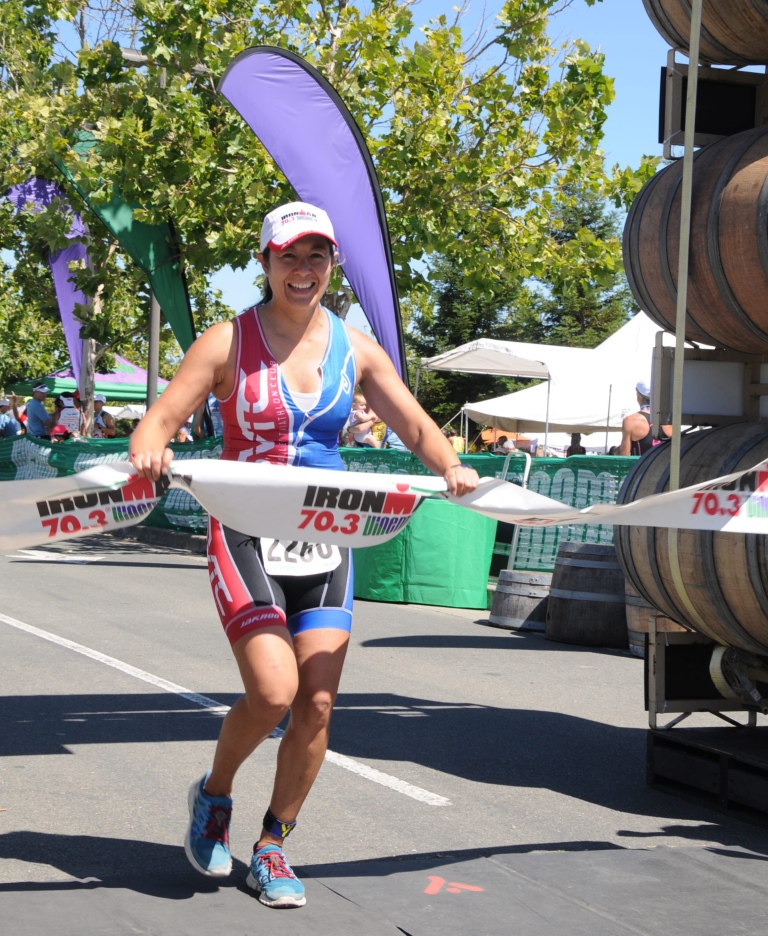 I started my carb loading and hydration loading with Osmo Pre-Load 48 hours prior to the race.  I typically try to stay hydrated all season long.   I’ve been taking a Nutrition for Endurance Athletes class at Stanford and have incorporated the following into my Pre-Race nutrition and hydration routine:

For details and photos of what I actually ate, check out this link:

Wonder how the Hungry Athlete carbo loads? In preparation for my half Ironman this past weekend, I carb loaded…

On Race Day, I ate a berry scone, banana, potato gnocchi and drank Osmo Pre-Load.  Since I had to wait almost an hour before my wave started, I ate a granola and cranberry bar and continued to sip Osmo Pre-Load while standing around in transition.

I always want to get off the bike feeling full and ahead of my nutrition rather than behind.  On the run I consumed only gels, Salt Stick, water and drank coke starting the last 6 miles of the run. No GI issues and I felt I had enough calories in me.

1)  Hide your valuables (sunglasses, heart rate monitors, etc) under a towel or bag in transition.  In a panic and rush, your fellow triathletes may also trip over or kick your stuff around.

2)  Listen to your coach.  I posted the following on my coach’s Facebook page a few months ago.  He got a good chuckle out of it. 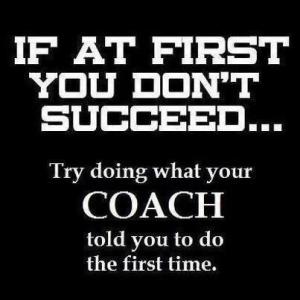 While I’m a pretty good student and take instruction well, I have to admit, even though coach told me I would not PR at Vineman due to my Ironman training, my ego still thought I might be able to pull it off or at least come close to last year’s time of 6:35.

3)  Periodization, tapering and recovery are just as important as the hard training.  Over-training can lead to poor results or injury.  This is particularly important at my age.  I want to make sure I stay healthy enough to continue to do triathlons as long as I want to.

4)  After the race, I had the Vision shifters replaced by Shimano Dura Ace which are much more reliable.  Tune up your bike before every race.  Perhaps I should learn some basic bicycle maintenance skills.

5)  Start out slow on the run.  Last year I was able to negative split the run by starting out conservatively.  I went out too fast on the run this year.